Day 3 started off with a nice clear morning at our campsite on the trail 2 miles east of Beverly.  It was our first night camping there in Beverly and felt kind of weird camping on the trail (which is totally legal) but you’re right next to someone’s private property so I slept a bit off.
We were able to get a little earlier start and on the trail by 8.

The trail here is quite pretty with a long high ridge of peaks to our right.  About 2 miles from town we came upon a parking lot and toilet.  Moving on we came across another parking lot about 4 miles out that was for Lenice Lake.  Both of these spots look good for camping.  Much better than what we chose and the toilet would’ve been a nice addition to camp.  Lesson learned there.

This area is called Lower Crab Creek.  It’s super pretty and full of ponds and swamps and streams.  Great place to day ride out of or do a beginner bike pack trip.   I also hear the Beverly Dunes area nearby but I’ve yet to look into that for fatbiking.

The only wet spot on the entire first 200 miles and Randy’s chain broke…right in ankle high mush lol…. 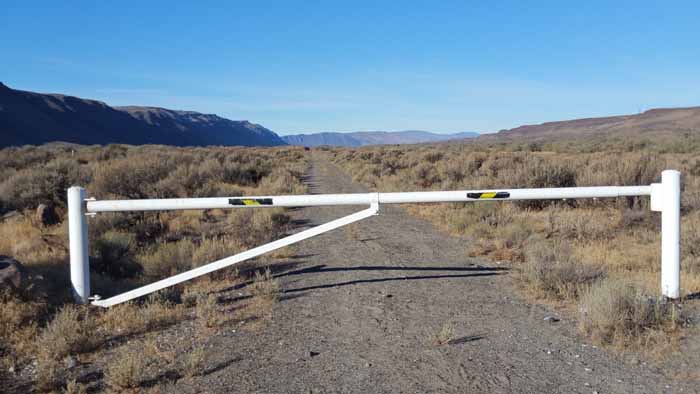 A lot of gates were just like this. Easy to get around.

Traveling on, we arrived at the infamous “Smyrna” area.  An old railway stop but not an actual town.  This was where we’d be attacked by hundreds of goat head thorns.  These things are serious.  Hard as a rock and sharp as a razor.   We had hundreds in each tire in just a few hundred feet of riding.

Thankfully we were both running tubeless wheels and plenty of Stans liquid latex sealant.  We didn’t flat thankfully.  We were surrounded by millions of them and we came out victorious.  Sparta!!!!  There was a moment though when we both thought, man this is gonna be rough if we have to continue on the trail.  But in Smyrna there is another detour. The start of a very long detour off the trail.  Our version had more pavement in it though by accident.

It’s also here where we goofed up and misread our maps and ended up going the wrong way…for a long way haha.  Instead of continuing east on Crab Creek Rd we took our turn up to Hwy 26, just like the DNR maps says (In their defense I just didn’t know how to read a map haha).   This sent us through some farms and up over a small pass.  The good was that we ended up at a Shell station full of hot fried food where we reloaded on chicken fingers and hot dogs and yup, more Gatorade.  The downside was that we took Hwy 26 all the way to Othello which was a drag.  It has a huge shoulder but still loud and just a drag.  Don’t do what we did unless you need corn dogs BAD. 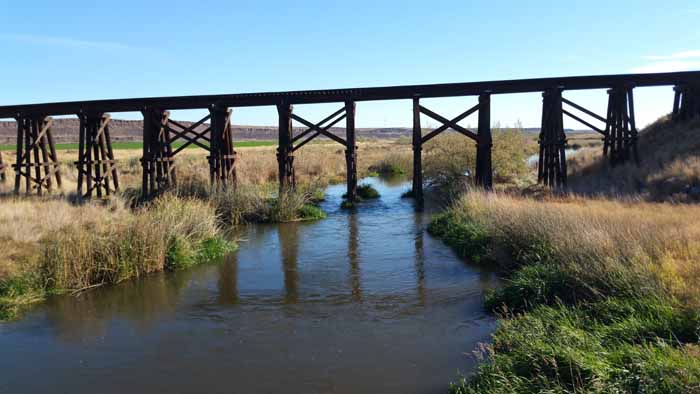 This is a section of the railroad that must have been some addition that ran north and still had the track on it but appeared abandoned. Oh, and if you see this cool bridge, turn around. You’ve gone too far! 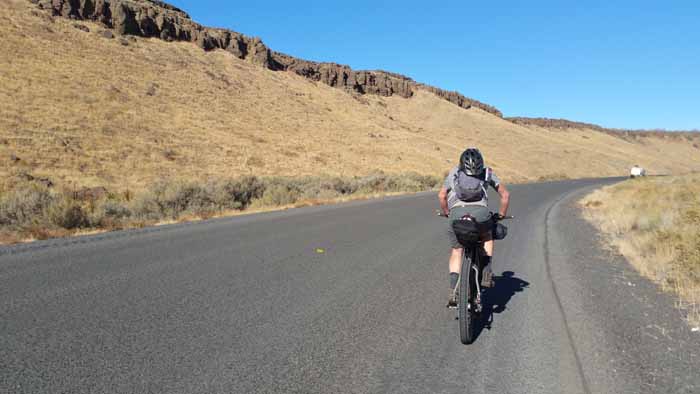 Randy leading out up the pass. Off to our left you can’t see it but there is a stream there and we saw two different Herons hunting. 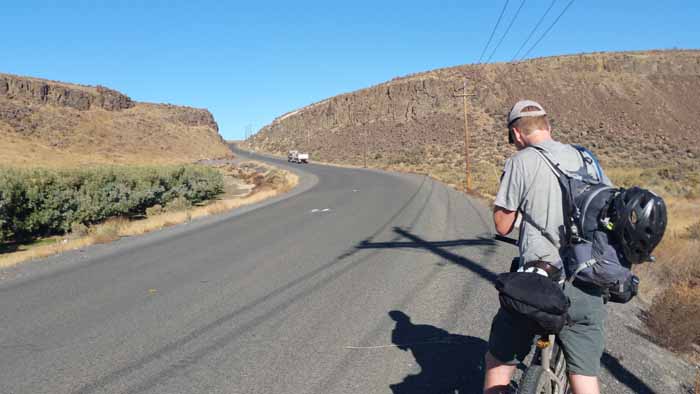 Taking a quick break before continuing on up the road. That semi up ahead was one of the contributors to “onion road” that you’ll read about. 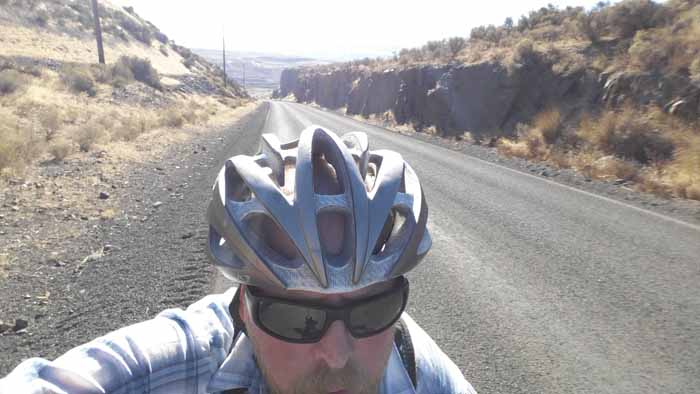 The only perk of our mistake…..chicken fingers and hotdogs lol

For reference, when you leave Smyrna, you want to get on Crab Creek Rd and head straight east where it connects with 17 and then Rd E SW.  When Rd E SW bends and heads due north at the intersection you want to continue on Crab Creek Rd which will take you all the way to Gillis Rd and then hwy 26, some 20 miles.  It runs parallel to the rail and highway so easy to find if you’re looking for it.  We missed a lot of stuff on this section.  Kind of disappointed about that but leaves something for next time!  Total mileage to Othello is around 26 miles from Smyrna.  This reroute exists due to the fact that the trails are still in place the entire way from Smyrna to Warden.  Word is this section was bought by some other rail company but was never used.  This is called “railbanking”.  All I saw was a sweet path for a rail bike conversion 🙂

Riding up the road I was fighting some serious shifting issues and stopped a few times.  Too tired to fuss with it I just kept on because Randy was really pulling away from me.  Just before Othello he pulled over in a shady spot and when I l set my bike down I noticed a chain link was coming undone.  Quickly fixed that and we were on our way again.   Earlier, Randy had broke his chain so we were one for one 🙂

Othello is a full service town and may even have a hotel. Camping in this section is debatable.  You might be able to find some quiet spots along the Crab Creek rd section other than that you’d need to ride from Beverly to Warden.
We loaded up with water again and Randy bought us some Snickers ice cream bars….mmmmm.  From Othello you head north up to Warden.  All pavement.
On a side note, our friend Pat mapped out a nice route that follows the canal from Othello to Warden.  You can read about it here http://26inchslicks.blogspot.com/2012/05/recon-marathon.html  I know I’ll check that out next time.  This whole time from Smyrna we’d been seeing onions all over the road.  We named the detour “Onion Road”.  Seriously….how hard is it to tarp your trucks? And why couldn’t they be mangos instead 🙂

We arrived in Warden around 5pm after a very hilly detour up from Othello.  Seriously, all these detours are hilly!  Like a thousand feet of climbing on each one.  So be prepared for that.  It’s 15 miles from Othello to Warden.  Along the way we saw a coyote hanging out along the side of the road.  Randy scared it away when he barked at it 🙂 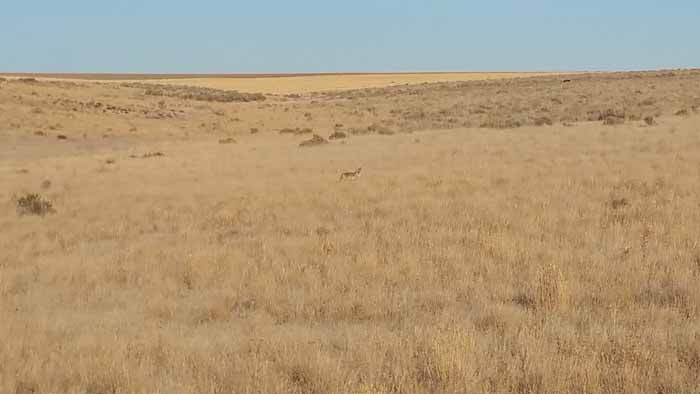 When we arrived in Warden, there was an obvious stink and it wasn’t us for once.  Apparently the town has some smelly byproduct waste smell from reconditioning industrial waste water.  (I had to google “Warden smell” and got that in about 1 second lol).  But there we grabbed the towns coldest beers and headed out on the trail a mile or so and set up camp again. 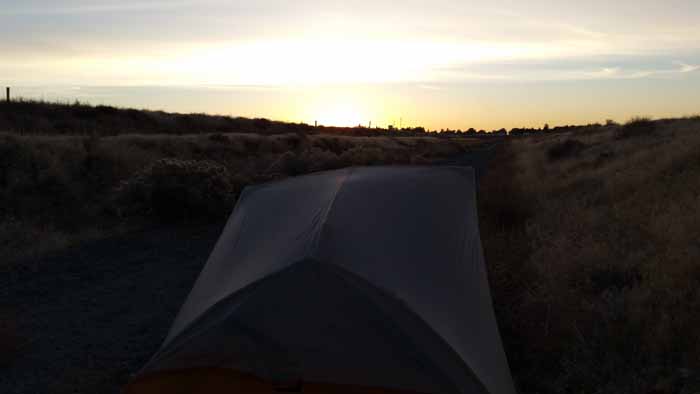 We had a nice quiet evening cooking or first backpacker meal, drinking our PBR’s in Ward’s honor (in Ward-en) and looking at the stars.  We even saw the International Space Station briefly thanks to Ward’s heads up. 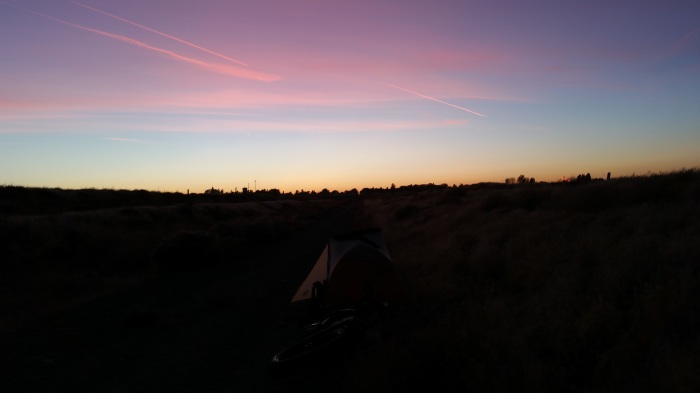 The night was quiet, cold and clear.

This site uses Akismet to reduce spam. Learn how your comment data is processed.